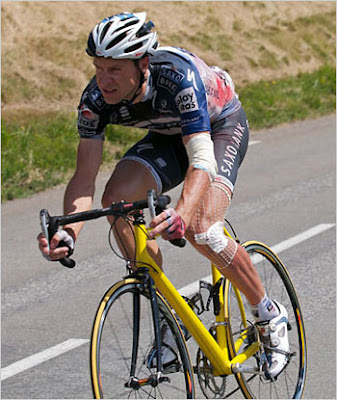 No wimpy broom wagon for Jens!

Jens Voigt is an amazing & unique rider. Probably one of the top rouleur riders around. With his way with words he's turned into a media darling, often leaving us all smiling. Also, his aggressive & plucky style of riding (usually hammering off the front) garnering a huge legion of fans. I'm one.

Now, the popular German juggernaut will join in to help the Schleck brothers in the pursuit of winning the Tour. His seven year tenure with Saxo Bank came at the end. The team seem to implode after the Schlecks decided to leave for the new Luxembourg Pro Cycling Project. It wasn't a surprise that a large portion of the team has left or in the midst of leaving.
The 39 year old Voigt will add his high level of cycling experience, humorous candor, & steely determination to the new team. His love for the bike is legendary. How about last years spectacular fall on a descent of the Col de Peyresourde? He crashed due to his front tire exploding, bike damaged, body bruised and no support car.

Voigt quickly refused the advances of the broom wagon and received a spare junior bike. Way too small for him he jumped on the yellow bike with toe clips. The team car was way out ahead. Bjarne Riis soon found out and made arrangements to leave a bike with a policeman. Voigt rode over 15km where he met the policeman for the crucial exchange. He made it to the last group finishing about a half hour after the winner.

Refusing to quit... the Jens way!

chickeee said…
then there was THAT OTHER CRASH .. and he's still racing - truly fearless http://www.youtube.com/watch?v=QuKDzlmwMdY
November 16, 2010 at 7:52 PM