A turn of a new leaf 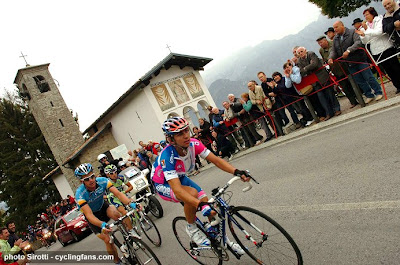 Tomorrow's last great monument of the season, Tour of Lombardy, will fall. The Italians call it la Classica delle Foglie Morte, "the Classic of the Falling Leaves." A beautiful last call to the cycling season as it takes place around picturesque Lake Como.

Fifty years ago in 1960, race organizer Vincenzo Torriani added the Wall of Sormano. He wanted to avoid sprint finishes so he introduced this monster climb. Around 2km with a staggering 22% gradient. Belgium Emile Daems was one of the few to be able to ride up it and then win the race. Most of his fellow riders walked up it.

This classic has always been the domain for Italian riders. They won 65 editions. Perhaps, the iconic Madonna del Ghisallo hilltop chapel is the presence of the race. It's on a 10km slope and sits as a beacon to all cyclists. With it's collection of bicycles, jerseys, medals from past champions' it serves to protect the riders. The great il Campionissimo, Fausto Coppi won this race a record five times. A bronze bust sits outside the chapel and to me he looks like a silent sentinel to the race.

This 2010 race will be hilly and a climber like Dan Martin is a hot favorite. His season has been very good winning the Tour of Poland, Tre Valli Varisine & a second in the hilly Emilia. Sean Kelly's three wins; 1983, '85, '91 was the last three Irish victories. I believe Martin can do it.

Yet, he faces stiff competition. Vuelta maestro, Vincenzo 'the shark' Nibali, is primed and hungry to add a monumental bite to his palmares. Alexander Kolobnev seems to be the rider looking in. This year, the Russian was fourth in Emilia, 2nd in Liege-Bastogne-Liege & seventh in the World Championships. He will be looking to better last year's third place with a monumental victory. Those are my top three.

It's bittersweet to see the season come to an end. In all, an appropriate Italian way to end ....beautifully!
Fausto Coppi Italian riders The Classics The Monuments