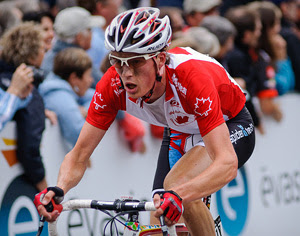 Will Routley in the GP Québec.

UCI President Pat McQuaid made it known that Québec City can be a potential host. It's the right step towards globalization of cycling and concrete support granting Québec City/Montréal 5 year ProTour Licenses.

Event organizer, Serge Arsenault is a popular figure in Quebec cycling. He was the organizer in the former men's Montréal World Cup from 1988 to 1991. And, now after bringing the ProTour in Québec, he's looking towards the possibility of having the 2015 Worlds in La belle province.

Although, the decision will not be announced until the 2011 World Road Championships in Copenhagen... I have a good feeling as to where I'll be in 2015!
World Championships