Two stars shone at the Gran Piemonte. First star, Philippe Gilbert was back as a repeat winner blasting away from Leonardo Bertagnolli (2nd) & Matti Breschel (3rd). The Belgium fastman looked very much in control and made it known to all that Lombardy is next up on his plate. Maybe, that certain world sting is fading as he seems set on a stronger finish as the season winds down this Saturday.

Newly crowned world champion, Thor Hushovd gets second star for showcasing his new stripes in this semi-classic. The God of Thunder made his debut as the new World Champion and although he finished in fourteenth just honoring the magical jersey was pure class. He postponed surgery to remove a plate and six screws from his left collarbone to ride in the World jersey. Lombardy is his last race of the season.

He said, "It is the attention on me that has changed. People keep looking for me to pull me this way or that way."

I'm sure he won't mind the attention! 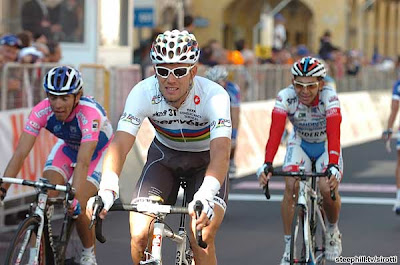