Team Schleck, err Team Luxembourg, has added climbing sensation Brice Feillu to it's fold. I say climbing sensation because that's what he is or still is. The 25 year old Frenchman had a huge start in the 2009 Tour de France convincingly winning the mountain stage to the ski station of Arcalis. Back then, he was only 23 years old in his first pro season, first Tour, first mountain stage and first victory. He would go on to finish 25th overall. The quirky French media raised a storm pegging Feillu as the next French Tour hope. But that's a special pressure that may go unrelieved. 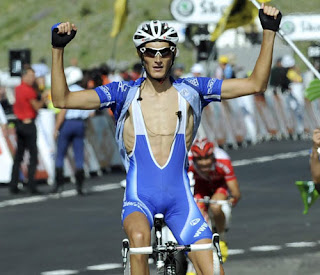 Winning the 2009 Tour Stage 7...
The young grimpeur proves he's destined to go higher.
In 2010, Feillu jumped from the floundering Agritubel team to the Dutch Vacansoleil team which proved even more frustrating without invites to any of the Grand Tours. Now, on the new super Schleck team, young Feillu will probably find a new lease to his cycling career. It seems a good fit for the grimpeur working for the Schleck's especially in next years mountainous Tour.

Team Luxy will have a winner to be sure. A young highly motivated grimpeur to help and quite possibly to shine once again in the polka dots. He'll just get better at what he does so well... climbing! 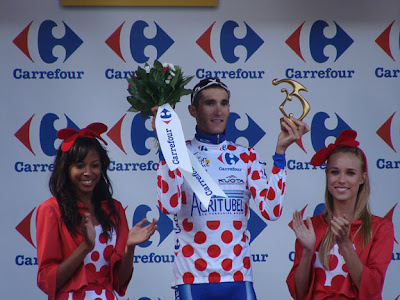 2009 Tour...
Next season the polka dots will be calling again!