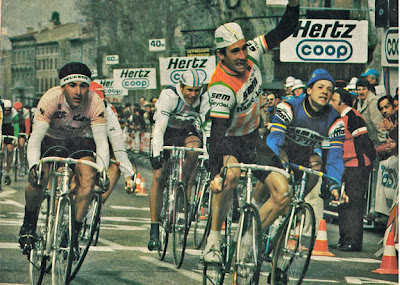 1983 Paris Nice...
King Kelly wins stage 3 in front of Francis Castaing (left) & Josef Lieckens.
He'll win a total of 3 stages and the overall!
Sean Kelly was a 'Puncheur'. The rider that had enough tactical cool combine with his famous speed to win big time.

As a sprinter he fared very well on short climbs able to maintain high energy over a short time. He climbed fairly well in the mountains, during the Tour, somewhat of a risk to his sprinting speed.

Paris-Nice suited the Irishman. A short stage race with enough in it for him to win a record seven times (1982-1988)! 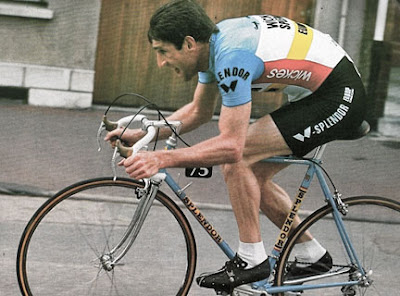 IzaakSnijtsheuvel said…
Funny how the advertisement 'wickes' ends up upside down when he's racing.
December 19, 2010 at 12:18 PM