When I first learned of Bill Stricklands book, 'Tour De Lance', I thought it was just 'another return of' Lance book. Initially, I was dreading it thinking it will be a sugar coated comeback pill. Hard to swallow. Well, I was wrong. My reading experience turned from complacent then cresting up to exhilaration. 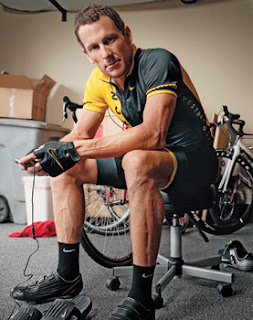 
Strickland has a unique view, literally, of the insides of the 2009 Astana's machine. What a perspective as he writes in detail of the two fiery teammates; Contador & Armstrong. The two stars; one youthful & the aging veteran left me wanting more of their cordial hatred towards each other. You'd think mastermind, Bruyneel brought the two hot heads together to create clever marketing drama.

What I enjoyed is that Strickland doesn't merely hover on the periphery he's full in it. He has access to Johan Bruyneel and the team. Access restricted? Not for him! He roams freely in the close confines of the team car witnessing tactics & strategies even helping at the finish line giving out mussettes.

Strickland's insider account of other riders are further insightful. Dave Zabriskie is one of cycling's quirky. His experience going through a three week Tour with his body depleting itself through hardship is both funny & revealing. Zabriskie explains, "You become stupider and stupider and stupider. You start to do things like leave your riding shoes behind in the hotel room, which is bad enough, but then you can also barely understand why your director is upset with you for doing it. You're not suffering. It's way past that. You're disappearing."

However, the star shines on Armstrong. Strickland believes he's only really at peace on a bike. "His years away from the sport were just a train wreck. He's a guy with so much energy, and so much drive, that he spins out of control," he says. Strickland is now convince that Armstrong is clean. After having time to digest this read, I have a better understanding of his comeback reoriented to selflessly raising awareness about cancer. 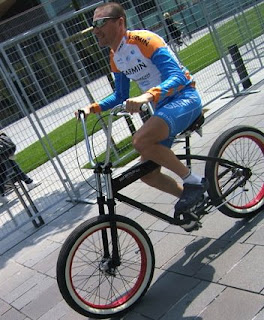 Patrick Mahoney said…
I thought it was a great book as well. I had read Strickland's book 10 points earlier in the year and really enjoyed his writing already going into reading this.
December 20, 2010 at 2:37 PM

I'm curious what his next book will be...

Empidog said…
I read this book and it gave me a insight into his working ethics...I wouldn't like him as a boss, If he finds someone better than you or if you fail..Your out....!! No mercy....single minded to the intended goal , no wonder he won so many tours, you have to respect him for that but feel sorry for the ones who couldn't keep up..Livingstone (now back in the fold at Mellow Johnnys ) Heras, Hamilton etc....mmm
December 23, 2010 at 8:42 AM

Richard said…
I'm still not a Lance fan but I now have respect for him...

Groover said…
Just catching up ... sorry! Interesting that you changed your view after the read. I have the same reservations but may have to read the book now since you made me curious. I'd still bet it wouldn't change my mind about Lance!

The read got tantalizingly hard to not put down. Strickland's a good writer keeping it interesting full of info behind the scenes.
I'm still not a fan... Now, I just have begrudging respect!