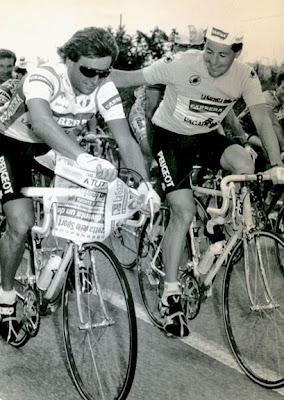 'What's our horror-scope say?"
Stephen Roche stormed into the 1987 Giro wanting more than just the co-leader position in the Carrera squad. Management wanted Roberto Visentini (1986 winner) to go for the overall. But, Roche thought otherwise. His early season results was clear indication that he should lead the team.

The Punch-up...
The Irishman won the Valencia Vuerta and his third Tour of Romandie. Visentini, on the other hand,  had no wins leading up to the Giro.
Both riders took turns wearing the Pink Jersey and on stage 14, cracks appeared in the Carrera team armor. A small breakaway formed and Roche tore away with them leaving race leader, Visentini unable to respond. After the stage, Visentini lost a whopping six minutes & the pink jersey to Roche slipping down the GC. We may never know the real story. But I discovered interesting allegations... That the team was unable to support Visentini and that he had forgotten to eat.
The accusations continued, complicated by Visentini complaining to the media of Roche's betrayal. There was even talk forbidding Roche from starting the following morning and dropping him from the team for the Tour. 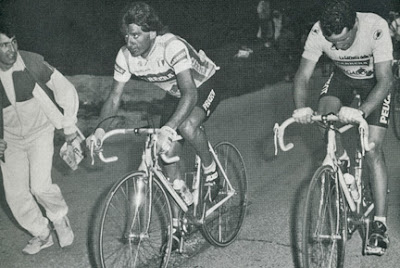 Uneasy Non Alliance...
Tour '87
More drama. The last week saw Roche holding onto his leaders pink jersey... tightly. The angry tifosi 'welcomed' Roche with insults, clenched fists, & spitting but was not subjected to actual physical damage. Speaking to L'Equipe, Roche revealed after stage 17 on the climb to Monte Bondone, "Towards the end of the stage, I told him (Visentini) that something wasn't working properly on the bike; the handlebars were shaking. Did you see his reaction was? he attacked immediately." Roche's faithful domestique, Eddy Schepers added this about Visentini; "He tried to push me into the ditch. Visentini can't bear the sight of me and it's time this Giro was over."
Visentini didn't deny this saying, "Yes, I did try to kick him up in the air. It's the least I could do."
With the hope of the overall lead fading fast, Visentini seem to suffer from a persecution complex by accusing the entire Fagor team, Robert Millar & Johan Van der Velde of conspiring to help Stephen Roche to win the Giro. With his raving, the Italian media turned a deaf ear and Visentini lost all credibility. Adding injury to his slurs, Visentini crashed and loss a further six minutes to Pila, and finished the stage in pain. Afterwards, the once proud winner in 1986, announced that he was retiring from the Giro due to a wrist injury. A sad way to finish.
Stephen Roche rode with quiet tact and duly won the final ITT stage, to celebrate his Giro victory in grand style. Proving without a doubt that he was the strongest in the 1987 Giro d'Italia. 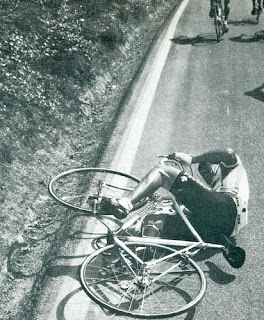 ...Visentini crashes to Pila losing any hopes of victory...
Tour '87 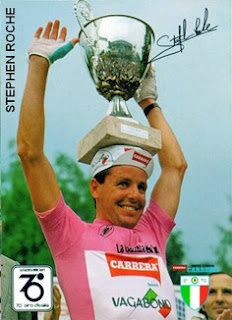 So glad you're enjoy my blog!

He sure looks together, well we still have a long ways to catch him! And you're right cycling does keep one young!
December 15, 2010 at 3:41 PM