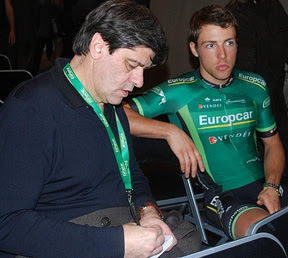 I'm excited that Canadian cycling is on a huge revolution and growing in Europe. Steve Bauer's, SpiderTech team is now based on French soil and ready to battle as a new Pro Continental team.
Rollin, formerly of Cervelo Test Team is now on Marc Madiot's French FDJ team. A perfect transition for the rider accustomed to rough climates with dreams of pavé glory. He's ideally suited for the rough and tumble classic races; Flanders and Roubaix. Former Paris-Roubaix winner, Madiot knows a thing or two about riding on the cobbles. He's won it twice and is the dividing rod to charge Rollin to certain pave victory. Last season, he finished tantalizingly close (fifth place) in a very wet Kuurne-Bruxelles-Kuurne.

He just finished the Tour of Qatar with a 15th overall. And, more importantly, encouraging results with a solid 4th in stage 4 & 6 and 7th in stage 2.

David Veilleux, 23 years old, joins Jean-Rene Bernadeau's Europcar Pro Continental team. You will remember the timely signing of the rental car company to replace departed BBox Telecom. Veilleux turned North American Pro with Jittery Joe's in 2007. It looks like a good move up for him to race and win in Europe. He has impressive credentials; 2010 Canadian & US Criterium Champion, stage wins in the Nature Valley & Tour of Pennsylvania stage races, a bronze medal in the Pan American U23 TT championship, four time Canadian U23 TT champion, & 10th at the 2009 Espoir TT Worlds.

Also, an added Québec angle, Louis Garneau is the official clothing & helmet supplier for the new Europcar team. The 2011 season is starting to be an exciting time ...as Québec cycling meets France! 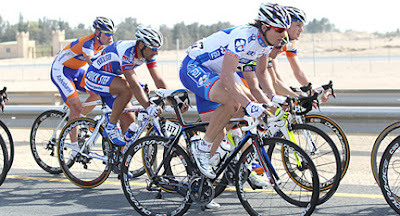