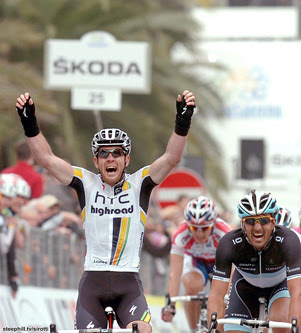 Aussie Locomotive.
I never picked Matt Goss to win the exciting Milan-San Remo. He coyly positioned himself well riding in the slipstream with danger men: Fabian Cancellara, Philippe Gilbert & Allesandro Ballan.
I picked one of those last three for the win but I would never figure on Goss. A great race right throughout especially on the descent of the Cipressa as the impressive FDJ men: Steve Chainel & Yoann Offredo bolted away. I was cheering on the French pair and I thought maybe just maybe a Frenchman can somehow do it.
But, an amazing sprint finish was the way to settle this great race as Gilbert & Cancellara were eclipsed by a faster locomotive. Matt Goss made history as the first Australian to win the Primavera. Goss will move up considerably in the HTC pecking order and he looks a real lethal threat for further classic victories... Flanders & Roubaix are coming.
Milan-Sanremo sprinters The Classics The Monuments video

Jim said…
A break? That happens so rarely in Milan-San Remo. The attacks at the end were exciting to watch. One after another. What a great finish! Thanks for sharing.
March 21, 2011 at 1:31 PM