A Very Good Wake Up Call 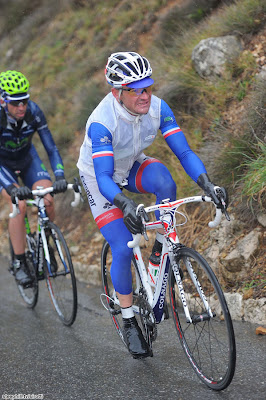 Thomas Voeckler,
dressed for success.
Paris-Nice was just the wake up tonic for a night of unrest, I told myself not to miss it. I couldn't help but think of yesterday's grisly stage full of calamities. This Race to the Sun it's not. The day was cold and wet with plenty of slick roads. 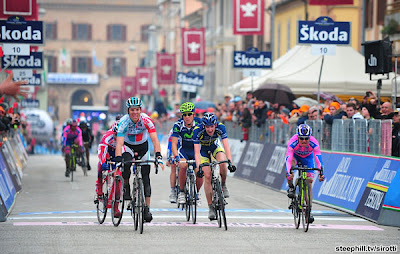 The Belgian Bullet does it again!
In fact, yesterday's horrific crash of Robert Kiserlovski (Astana) lying under the parked truck is not as bad as I feared. I still cringe watching it (last posted here). He suffered eight stitches to his face and no broken bones and sent home for rest.

For French National Champion, Thomas Voeckler another rain soak dangerous day wasn't going dampen his spirits. I'm very glad he portrayed that magical word, panache. A French rider riding aggressively in Paris-Nice is a joy to watch as he soloed to his second stage win. Tony Martin's overall victory alerted everyone that he's a real threat for the Tour.

One race was over and stage 5 of Tirreno-Adriatico started. I was already into my second cup of coffee as this exciting race turned for the worst for two escape riders: Andrei Amador (Movistar) & Davide Malacame (Quick Step). Wout Poels (Vacansoleil) caught the breakaway and snuck up on the two riders in the last hundred metres looking like he would steal it. No one could see, it happened so fast, that Philippe Gilbert was again the Belgian Bullet and blasted passed everyone to win the stage. I think he looks untouchable in Milan-San Remo. Cadel Evans finished in the chasing pack and with very strong support from his BMC teammates, he took the blue jersey away from Robert Gesink.

There's two stages left, the top five riders are separated by seconds and Evans never looked better for the overall... it promises to be a great finish!
Paris-Nice Tirreno-Adriatico

Michael said…
Smart racing and strong finish by Gilbert, but I was secretly hoping Amador would hold on.
March 14, 2011 at 8:02 AM

Richard said…
Yes, I wanted any of the two escapees to grab it they should've turned around sooner... they both let it slip away! Still exciting!
March 14, 2011 at 10:46 AM

TRI714 said…
So happy for Voeckler. That guy just attacked and attacked the whole week going off the front and hammering.
March 14, 2011 at 4:21 PM