David Veilleux: A trip through Hell 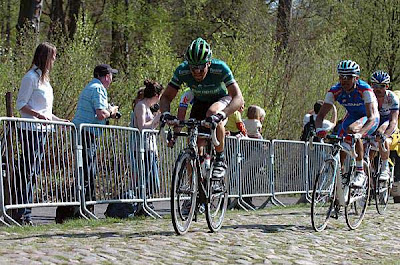 Veilleux driving on the cobbles of Paris-Roubaix.

Fantastic finish for the 23 year old in his debut season riding for Pro Continental team, Europcar. Another worker riding so aggressive he put himself into the break and finished with a remarkable result.

Veilleux is showing that he is adapting well to the hardcore European racing style especially to the world's hardest one day classic race. Notably, he was third in the 2002 Canadian cyclo cross championship. Also, he is a former U23 Canadian time trial champion (2006, '07-'09) and National road race champion (2006, '08).

Jean-René Bernaudeau made, to my opinion, a very good decision to sign him. Knowing that he had success and progressing well enough for a European education. Around the time when Bernaudeau couldn't find a sponsor to replace the departing BBox out came Europcar, the car hire company. Presto! Very good karma.

Here's a candid conversation with Canadian Cycling Magazine and David Veilleux. Interesting view on his first Paris-Roubaix and his plans for the rest of the season. I know that he's one to watch in the future and good things are coming for him. His first trip through Hell was exceptional!

TrevorW🚴 said…
Hi
I just thought that I would link in as a follower....Look forward to reading more of your posts.

I'm following you too