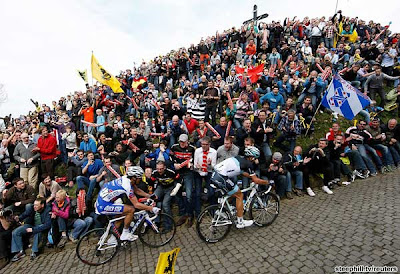 Kings on top of the Muur-Kapelmuur...
Cancellara didn't quite have the horsepower to leave
a determined Chavanel.

Utterly amazing Tour of Flanders this past weekend. And the heavy favorite, Cancellara finished third, by no means a failure. He is by far the strongest rider and a heavy favorite for Paris-Roubaix. 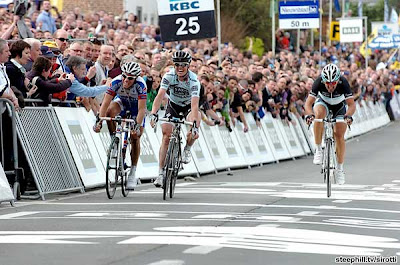 Nick Nuyens excellent comeback with kilometres remaining to win, crowns him as the new King of Flanders. I was biting my nails with the final sprint as Nuyens surged past Cancellara and in front of a gutsy ride by Sylvain Chavanel.

BMC'ers: George Hincapie (6th), Alessandro Ballan (12th), Greg Van Avermaet (22nd) were very aggressive, as also their team, reacting to bring back Chavanel and Cancellara. They were the team that worked well together brilliantly. Their smart tactical racing can only mean that a big win will come soon. This Sunday is an opportunity waiting for one of these three. Unfortunately, Karsten Kroon crashed out with a broken collarbone forcing him out of the Spring Classics.

Perhaps this wasn't quite the race for Juan Antonio Flecha as he battled to 11th. But, his teammate, Geraint Thomas was the rising classic star for Sky Procycling with an amazing ride for 10th place. A promise for better things to come? I think so. And for a hungry Flecha, Sunday is approaching.

There's one guy I'm following, and that's Dominque Rollin (FDJ) who race consistently for 15th place. The Canadian rides even better when the weather goes sideways. His 2008 rainy stage 5 win in the Tour of California is testament to his abilities. Last year, in Paris-Roubaix, Rollin finished 33rd and he dreams on winning it. I hope it's a cold and wet Paris-Roubaix... because dreams can come true! 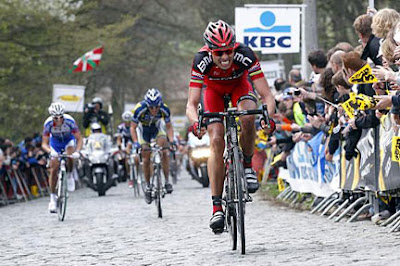