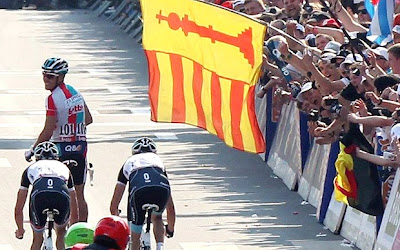 Grin & bear it!
No stopping Philippe Gilbert. None whatsoever.

Even with the double team effort by the Schleck brothers could not, will not, topple the new king of the Classics. The action started on the Cote de Roche aux Faucons as the three looked set to battle for the podium. Kudos to  Greg Van Avermaet, who gave it his last gas in trying to stay with the trio at the end. He rode well getting to an early break and then got himself with the trio with a few kilometres to go.

The king could do no wrong, and with his Omega charges controlling any threat the race was for second. The Schlecks never had the power to attack Gilbert but all in all, a fine podium place that any rider would love to have.

A classy win for the untouchable king!
Liege Bastogne Liege The Classics The Monuments