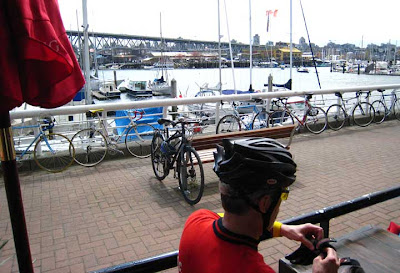 Beer lunch,
our steel steads against the railing.
We were not allowed to park against the pub
railing... Go Figure!

I received an email from David that he has the Columbus stickers. He invited me to ride with the steel bike gang at 11:00 this morning at Cafe Calabria on the Drive. A great opportunity to see David, Fritz, Hans and the gang once again for a ride. 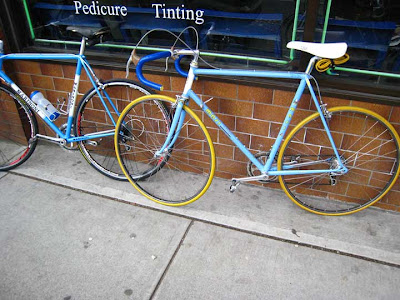 The last time I rode with them was two long years ago (see here) and I was anxious to see them again. A smiling Fritz was sitting outside the cafe and he greeted me with a handshake. Admiring his mid-seventies Benotto, he said that it was exactly like the team issued frame used by Francesco Moser in the 1976 Paris-Roubaix. Remember A Sunday in Hell?

Hans rolled in too with his Saronni red Colnago Master X Light, Paul had a beautiful light blue Masi, David rode a early eighties Pinarello & Brian rode in with a Gazelle. I can't remember the other fellows names but I saw a Cramerotti and Talbot.

I never knew of the Talbot so all I had to do was ask Fritz. The Talbot was a handmade racing frame made from Reynolds tubing produced from Carlton Cycles of Vancouver.

The guys had a close first look of my Marinoni. It received high praise for the paint job... Marinoni Cycles that is. I may have some knowledge of road racing history but these guys: Fritz, Paul, David and Brian definitely know bikes and parts. They're bicycle enthusiasts/collectors of the 'steel frame' kind.

Calabria is situated on Commercial Drive and has a old established Italian community. So, our Italian bikes minus the Talbot gathered plenty of attention. One Italian gentleman looked at my Marinoni and said, "Nice bicycle!" That was enough to make me smile.

All nine of us rode through Stanley Park and then for a beer lunch. A fun afternoon... thanks to the steel gang! 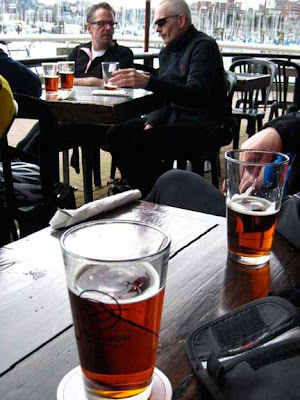 from my good view... 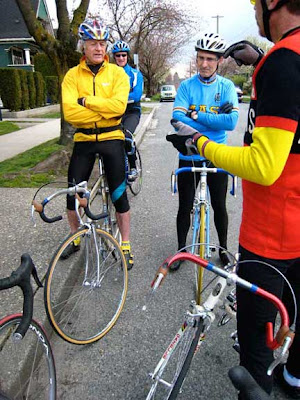 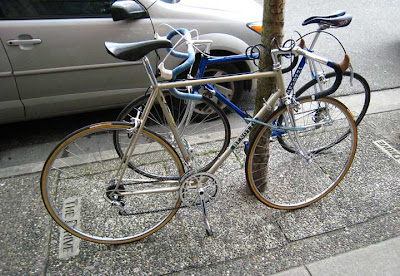 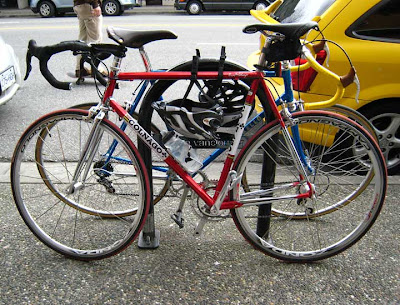 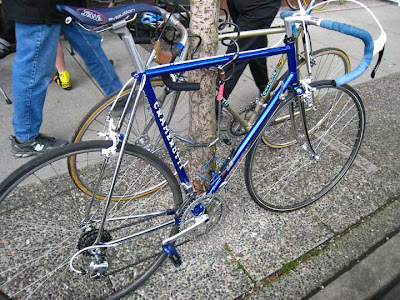 TrevorW🚴 said…
Some very nice bikes featured here.....thanks for sharing the photos of them...

fun day (little on the cool side) to show off the steel good to be in the bunch again!

Groover said…
I'm confused! The Marinoni getting a pedicure? ;)

Oh, it looks so much better after the pedicure...