Paris-Roubaix: Beating back the dust... Epically! 
I awoke half asleep at 4:30 AM to watch Paris-Roubaix.

If I was ever going to lose some sleep, then this would have to be it. The great race occurs once a year, a long time for us fans but thankfully better for the riders. An early wake up call, it's serenely dark and still quiet outside. So, I armed myself with plenty of coffee and tuned into Eurosport catching the lead group with around 125 kms left. 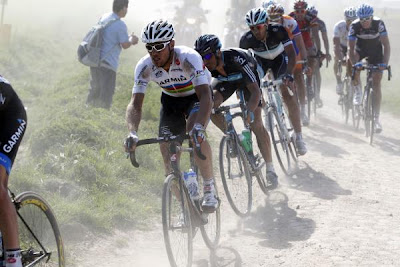 A good group too of eight notably with Canadian David Veilleux (Europcar) in his first debut of Hell. This is the former Bbox French team under the guidance of Jean-Rene Bernaudeau. Veilleux looked prominent in the lead group and strong over the pave, I'm interested to see how far he will go.

I had a sneaking suspicion when Boonen stopped (critical juncture) with a mechanical in the Arenberg Forest that this wasn't to be his day. I wrenched when I saw Hammond and Haussler go down what appeared to be a traffic island. Hammond looked like he got the worst for wear and abandoned. But Boonen's day was over when he flipped his bike and landed hard with about 69 kms to go. No fourth win today. And, Quick Step didn't have any step when co-leader and favorite Chavanel ate the road shortly afterwards. I still shudder seeing him go down with his pain expression. Heroic when he gets back on his bike and tries to chase back, torn and bloodied.

Garmin had many aces up it's sleeve with the worker Johan Van Summeren upfront remaining unscathed among the carnage and riding particularly well. Thor Hushovd stuck like glue to Cancellara and shadowed him when the late attacks came. Sep Vanmarcke and Gabriel Rasch joined in for what would proved to be important support.

Amazing to see Cancellara stop doing all the work with 30 kms to go. He just shook his hand (or was that a finger) at his team car and at the wheel suckers that it was enough. Carrefour de l'Arbre was his time to take off in his rocket like move and no one responded. Too late.

It wasn't the day for the World Champion, his roles reversed he played the loyal rider, and help give a chance to Van Summeren who was in the winning position. He even rode with a flat tyre with 5 kms left. A worker winning a workers race.

As for the young Canadian hopeful, David Veilleux finished his debut in 25th place.

I thought it was one of the most exciting PRs with plenty of exciting drama and a surprise winner. A huge win for Garmin-Cervelo and I'm sure they're feeling a sense of relief, hopefully with their problems behind them, to be back on top of the winning column. 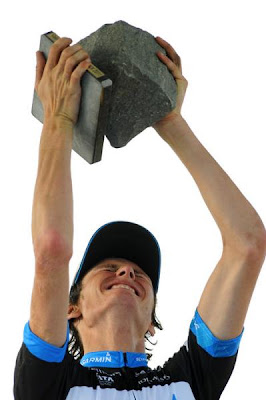 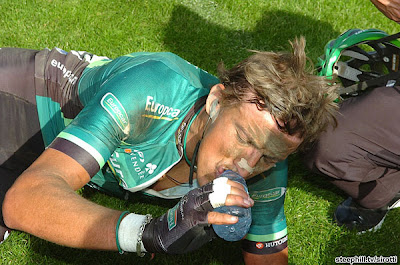