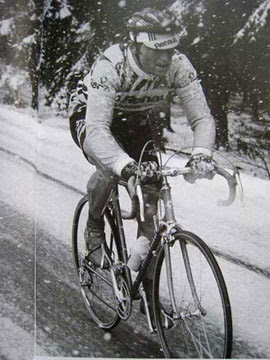 Philippe Gilbert's quest continues this Sunday looking to add Liege Bastonge Liege to his increasing palmares after his convincing wins in Amstel and Fleche Walloon. 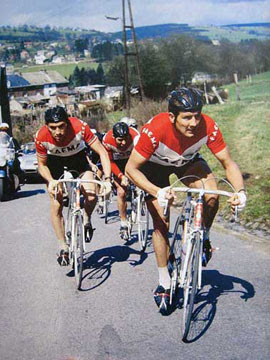 Gilbert is so dominating the single day classic races, I like to compare him with Eddy Merckx and Bernard Hinault love fest or domination in the classics. The three have a collective mindset that is key: to be tenacious, aggressive and have the fortitude to put it all together and just win.

La Doyenne is the oldest monument classic (since 1892). Sometimes it's the weather that makes an unpredictable adversary. 1980 was a scene as commentators call, 'Neige-Bastogne-Neige'. A certain tenacious Bernard Hinault attacking with 80 km to go in a blizzard to win alone. Hennie Kuiper would finish just over nine minutes in second. The Badger's hands were so badly frozen that he would lose feeling in his fingertips for the rest of his life. Of the 174 starters only 21 finish this ice battle.

Eddy Merckx has the record of five victories. In 1967, he was beaten in a sprint by Walter Godefroot. Merckx was back in 1969 and wanted revenge. Merckx got it. With help from his Faema brigade, the Cannibal finished with only his teammate Van Schil to win ... 8 minutes in front of Barry Hoban!

For Sunday, Philippe Gilbert heads into the oldest monument classic with a huge chance for the Ardennes triple!
Bernard Hinault Eddy Merckx Liege Bastogne Liege The Classics The Monuments