Jose Rujano: Up There Again 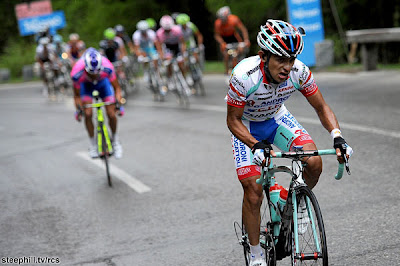 Rujano goes where few can follow.
I call pocket grimpeur Jose Rujano the comeback kid of this Giro.

After a five year struggle to find form and shuffling between teams, the Venezuelan rider is back on track in the Giro. In 2005, he was KOMs, won stage 19 to Sestriere finishing 3rd overall. He won todays stage finishing on top of Austria's very steep Grossglockner. And, although Contador gifted him the stage win, Rujano deserves it. Contador has a strangle hold on the Maglia Rosa after putting in a effortless ride on the rest of his challengers. He's three minutes up from second place Vincenzo 'The Shark' Nibali. As hopeless as it appears, the race is not over. There's critical mountain stages ahead and plenty of excitement to come.

I'm a firm believer that todays mountain stage is the start to this Giro. Tomorrows huge Zoncolan stage has changed and the climb and dangerous descent of the Monte Crostis is cancelled.

Rujano's upward athleticism has never remain a doubt since his second place on stage 9's Etna stage. Androni  Giocattoli's Gianni Savio can be the catalyst for nurturing back the twenty nine year old's long lost confidence.