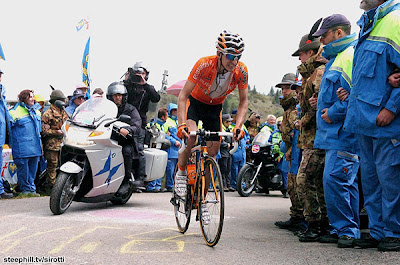 Aces high for Igor Anton.
Before todays stage up to the dreaded Zoncolan, Igor Anton stated that his goal was to win a stage in this Giro. 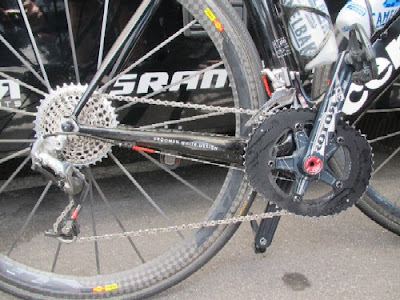 Millar's 36 tooth sprocket.
I admit I was disappointed that the nefarious Monte Crostis was pulled from this stage. An alluring mountain stage with a tricky descent, was pulled yet we were still left with a most dramatic finish. A shorten but steep stage awaited as most of the riders bikes were equipped with mountain bike rear derailleurs. Some, like David Millar had 36 tooth inner chain ring and 36 rear sprocket to tackle the enormous gradient of 22% of the Zoncolan.

Sheer hell awaited. Due to the narrow road, motor cars were not allowed to go up it. Only motorcycles fitted with a spare bike for each rider ...just in case. 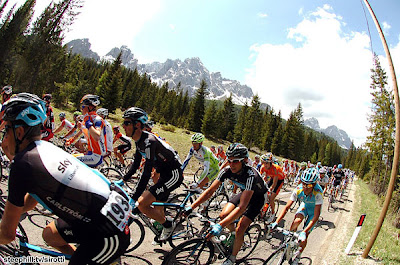 Canada's Michael Barry (Sky) setting his sites... high!
I remember watching last years Vuelta and seeing race leader Anton crash, breaking his collarbone shredding his red jersey only to abandon. He's back and rode a very gutsy ride to beat Contador by 33 seconds and 40 seconds on Vincenzo Nibali. Anton moves to third overall just one second behind Nibali. Can a podium place be his?

We can be thankful another huge mountain stage awaits Sunday! 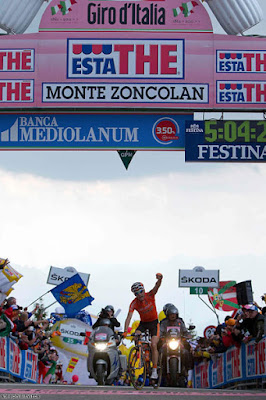 International Observer News said…
hi what's with the irregular elliptical sprocket.
May 22, 2011 at 1:13 AM

The Rotor Q Rings are elliptical chainrings claim to increase power generation reduce fatigue and prevent injury varying the size of the ring during the pedal stroke. I've yet to try it, interesting though!
May 22, 2011 at 7:15 AM