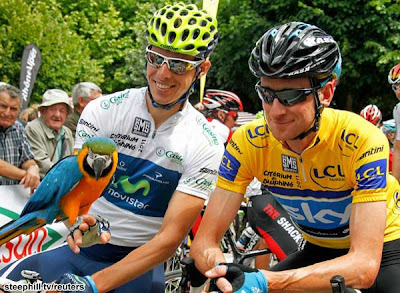 Costa & Wiggins at the start of stage 5...
with friend.
With two stages left in the Criterium du Dauphiné, an astounding French victory finally occurred today by Christophe Kern.

Today's mountain stage was the longest of the race (210 km) and while the French fans celebrated with Kern's fine stage victory Bradley Wiggins holds true to the yellow jersey. The next two stages will prove who has the climbers legs. Tomorrow will be the a huge test with six climbs ending with the steep Le  Collet d'Allevard. 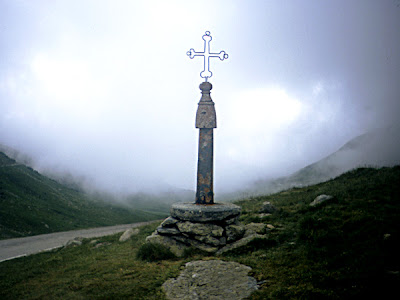 The Croix de Fer awaits on stage 7.
Sunday will be just as taxing going up the Col de la Croix de Fer and finishing up the La Toussuire, a grimpeurs dream and for everyone else a nightmare.

There's one grimpeur that is riding consistently well and wears the white jersey of best young rider... Rui Costa. He finished 19 seconds behind and sits in fifth overall just over two minutes behind Wiggins. He's already proven to be feisty off the bike. You may remember his famous altercation with Carlos Barredo at the finish of stage 6 at the Tour. 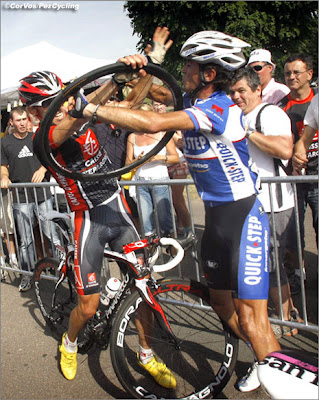 Bam the Biffo!
(also here).
The young Portuguese won the Vuelta a Madrid in May and with two mountain stages remaining the possibility of a stage victory is (pardon the pun) ...high! 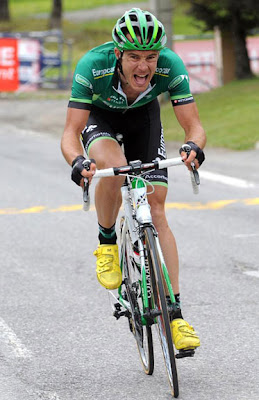