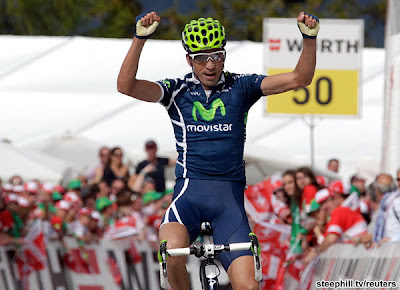 Solering to victory!
Ok, I'm happy no better yet -  ecstatic that Juan Mauricio Soler the Colombian climbing ace is back!

The Movistar rider solered (pardon the pun) to victory in stage 2 Crans-Montana, Tour de Suisse. I picked him to do well in this mountainous Tour de Suisse. I feel vindicated. After years of injuries and crashes, let's call it just plain bad luck, he finally turned it around and delivered a resounding stage victory and now wears the yellow leaders jersey.

His last win was four long years ago at the 2007 Vuelta a Burgos stage race in Spain. And, before that he was better known for his mountain win on stage 9 to Briancon, 2007 Tour also winning the KOMs jersey. The days of Colombian grimpeurs returned. At least so we thought. I'm a big fan for the Colombian mountain climbers especially of Lucho Herrera of the glorious eighties. 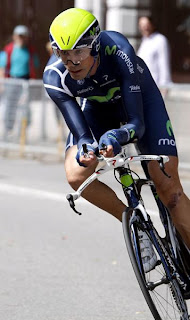 Bad luck beset Soler afterwards for four long years. In fact, I thought he was gone out of the limelight. But, I always watched from the corner of my eye of how he was doing... in between his crappy bad luck.

I'm glad to see him back and watching him on his bike as he creeps over it, in fact, his nickname is Spider.

This stage was for the climbers visiting the races highest point the Col de Nufenen at 2478 meters. Soler was position perfectly with 13 men all dangerous with five kilometers left. Di Luca, Cunego, F. Schleck & Leipheimer were big guns waiting to go off. With one km left, Soler took off and left Schleck and Cunego jostling together.

"I've done a six-week training block in Colombia and I'm in great form. It's going to be tough, but I hope to keep the jersey until the finish. I want to dedicate this win to Xavier Tondo, but also to my team who worked a lot for this to happen today," said Soler.

The Colombian grimpeur is back! 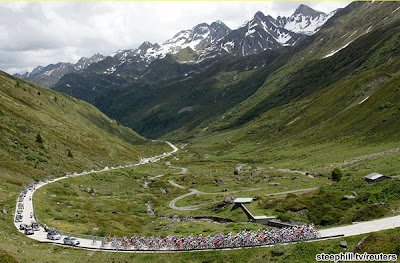 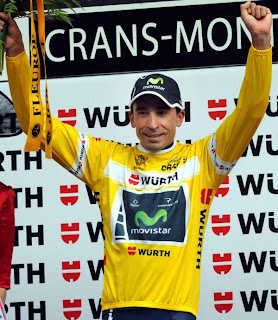