Time Trialling in the Solitude of the French Alps 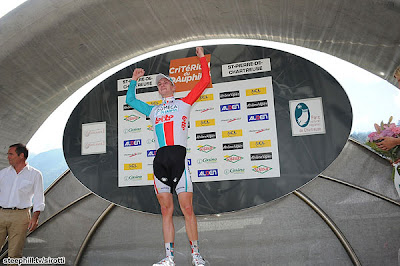 Jurgen Van Den Broeck wins at the top of the French Alps
beside 3 time winner Bernard Hinault.
The Criterium du Dauphine is off to a fast start with some riders riding into form for the Tour.

I had a chance to watch the exciting mountain finish of stage 1: Albertville to Saint-Pierre-de-Chartreuse. Jurgen Van Den Broeck (Omega Pharma-Lotto), who finished a solid fifth in the 2010 Tour, powered his way to a solo victory. The time trial specialist, nicknamed JVDB, exploded from the pack with 4 kms left. And his attack cause such an alarm, guys like Cadel Evans, Thomas Voeckler, Boasson Hagen (Eddy Boss) & Alexander Vinokourov (leader) were racing for second. 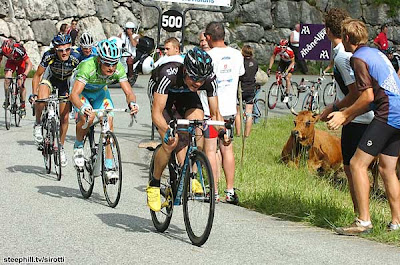 Eddy Boss chasing with fans & cow looking on!
After injury, it's good to see Eddy Boss (leading Young Rider) back and riding very well finishing in sixth and stands fifth overall. Although he's riding for Bradley Wiggins (fourth overall) there's every reason for him to gun for stage wins. Look out for him to do well in the TT Wednesday.

Another rider finding form is Nicolas Roche (AG2R) riding very well to fifth and sitting in the hunt for the GC in sixth overall.

Cadel Evans seems to be at the right place but not leading the race. A position he likes to be in. He finished in the chasing group in third and holds onto third overall. He looks quietly dangerous.

Joaquin Rodriquez tried to close the gap and refused to die, at least not yet. He chased Van Den Broeck to second finishing seven seconds behind.

The Grande Chartreuse (dating from the 11 Century) nestled quietly
in the French Alps also known famously for...
With so many riders capable of taking todays stage, Jurgen Van Den Broeck stole the show and put in his time trial speciality ... in the mountains! 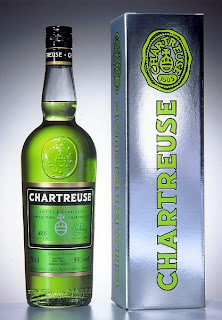