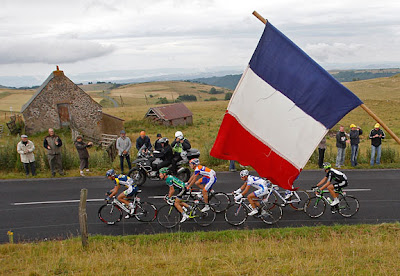 Vive la France!
during Stage 9
Photo: Christophe Ena/AP
Tomorrow is Bastille Day, and since 1947, 19 French riders have won a stage of the Tour on the French national holiday.

Thomas Voeckler retained the golden fleece after a very wet stage from Blaye-les-Mines to Lavaur. Tomorrow's stage, is where the race will really unfold. Turning up the heat on the riders (as if they need it), an appetizer, the climb up the 1538m La Hourquette d'Ancizan, the long dizzying pain up the 2115m Col du Tourmalet and then for dessert the finish up the difficult 1715m Luz Ardiden.

Which begs the question; can a Frenchman win? Voeckler says he expects to lose the yellow jersey tomorrow. And, with one of his valuable grimpeurs out of the race, Christophe Kern, he has reason to suspect his Europcar team will be disadvantaged in the high mountains.

French grimpeur, John Gradet unfortunately abandoned today citing fatigue and could the Giro and Tour double be too much for him? A few french riders show promise at least for Bastille glory. Not a threat for the GC, these riders could pull off a surprise? I'm looking at; Sandy Casar (FDJ) or Anthony Roux (FDJ).

The last time a Frenchman won on Bastille Day was David Moncoutie in 2005, stage 12 Briancon to Digne Les Bains. There are plenty of non French riders favor to win tomorrow's grueling mountain stage but the French fans will be especially cheering for a coureur cycliste francaise to return glory! 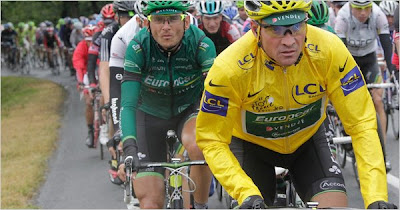