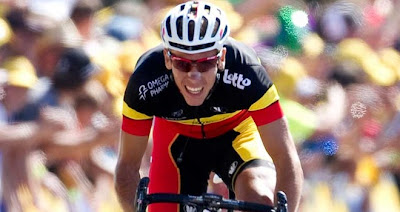 The King.
Philippe Gilbert is the king of the one-day races.

His 14th victory of the season and first San Sebastian classic was forthright and devastating. With 15km left, he was in the important 10-man group led by his teammate Jelle Vanendert. With 4km remaining he pulled a patented signature power move and soloed home to victory. Twelve seconds later, Carlos Barredo and Greg Van Avermaet followed in after the master of the one-day races had time to wave to the crowds.

Already with a hat-trick of wins in the Ardennes Classics (Amstel, Fleche and Liege), the Belgium star is setting his eyes for bigger prizes; the World Championship road race in Copenhagen and the three-peat in the Tour of Lombardy.