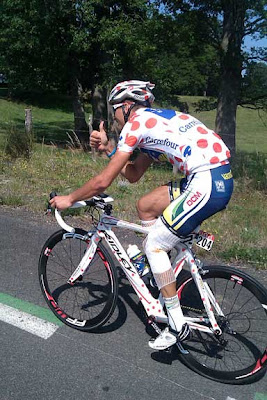 Johnny Hoogerland out during
the rest day...
Thumbs up inded!
photo: twitter
Yesterday was another epic day in the life of the Tour for all the riders.

But one man who has attained special hero status, is Johnny Hoogerland. His tangled affair with the barb wire fence via the French tv car hitting Juan Antonio Flecha and his determination to finish the stage is the stuff of legends.

Now, the Dutchman acquire enough climbing points to vault himself back up to KOM. I watched the video and I was just as emotional as he graced his presence on the podium. He has that mark of distinction of pure bravery under fire where many would've just abandon the stage.

I do hope he is back in the race for tomorrow...

Jim said…
That hit by the car was unbelievable! What a carnage this Tour has been so far; but of all the things that have happened, the hit by the car was unforgivable and completely reckless. I was appalled. I hope he can race and race well tomorrow and throughout the Tour. Go Johnny!
July 11, 2011 at 1:46 PM