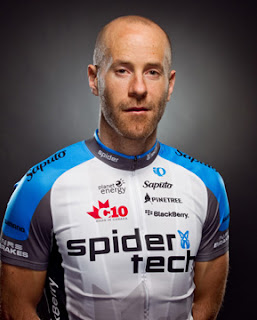 Svein Tuft finished very well in 12th on the hilly stage 3 of the Tour de l'Ain between Nantua and Lelex Monts-Jura. The SpiderTech captain vaults to 6th overall, only 49 seconds behind. 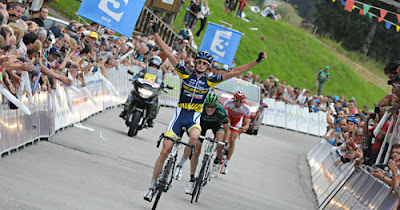 Tuft, known as a TT specialist, turned into a mountain specialist. His DS, Kevin Field said, "Svein Tuft had perhaps the best day in the mountains of his entire career. He simply put his head down and went on the attack all day consistently riding in front and finishing with Tour and Giro standouts in 12th place on the stage." Tomorrow's final stage will be a corker with the summit finish on top of the feared Col du Colombière. I'd like to believe he has a good chance to podium.

A surprise announcement: Svein Tuft will leave SpiderTech next season and will be moving to a World Tour team. Steve Bauer said, "We are grateful for what Svein brought to the team...as an athlete in his thirties, has a limited window of opportunity and hence felt that he needed to rejoin the World Tour now."

As of yet, no team has been named. I wouldn't be surprised that he's already signed a new contract. His first and only season with SpiderTech has been very successful and I was hoping he would stay to help shape the team for their objective to be on the World Tour in 2013.