Svein Tuft: On The Edge 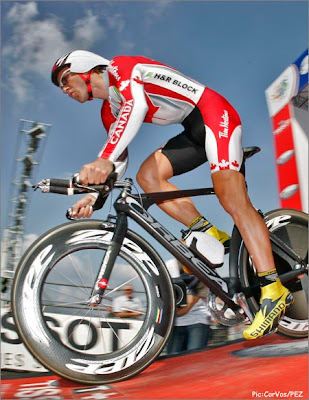 He won today's 76th Grand Prix Stad Zottegem in Belgium. With the help from his SpiderTech team he was in the right break in the race and with 18 kms left in this 181.7 km race, bolted away to win alone.

DS Kevin Field enthusiastically said, "The boys rode amazing today. Gripped it and ripped it. We had numbers in every move today. What an historic performance for Canadian cycling today."

With the historic win under his belt, Tuft has signed for the Australian GreenEdge cycling team. He cites that leaving the Continental SpiderTech team one of the most difficult decisions he ever made, but he wanted to test himself, in 2012, against the world's best. Steve Bauer's SpiderTech team is a season away from joining the ProTour.

The Canadian cycling team can only be happy to have Tuft shape it's foundation. It's a matter of time until SpiderTech matures and it's now going through the growing years.

For Svein Tuft, he'll be back to the UCI World Tour with a certain Edge... and certainly winning more races!