Upwards to the Vuelta 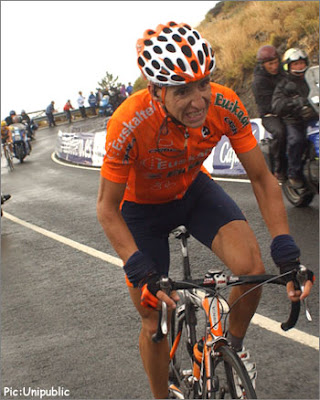 I'm glad the organizers will start, like last year, with a night time trial. It definitely makes this exciting Grand Tour unique. And, HTC is favored to take it from the rest of the teams. This is the last season, and final grand tour as a team, so look to the Cavendish led HTC train to arrive on good time. However, don't count off Sky with Bradley Wiggins (overall contender) back from his Tour crash, he'll look to start the Vuelta with a statement. In fact, he's so ready, he vowed in the French ambulance to race the Vuelta.

Not since 1978, the race will visit the cycling mad Basque region. Huge favorite, Igor Anton of Euskaltel-Euskadi will lead with a certain Basque pride motivated for stage wins and most importantly the overall. Last year, he fell on stage 14 and lost his chances of victory and now the gifted climber gets set to challenge for the overall in a very mountainous race, suited to him. 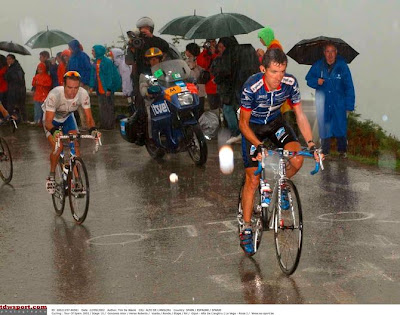 Enter the legendary Angliru...
The mountains start early on stage 4 to Sierra Nevada. Kudos to the organizers for the summit finish on the punisher... the Alto de l'Anglirú. Last time was 2008, and we're all glad it's invited back. I really hope that the climbers will be ready for this steep baby, this monster pitches up to 23% at it's steepest part and towers 1573 m (5161 ft) above sea level.

In 2002, it rained on the Angliru causing cars to stall on the steepest section trying hard to find enough grip while slipping on the slippery painted messages by fans. David Millar crashed three times, hit by a car and dismounted a metre before the finish line and handed in his bib number. A soggy and upset Millar said, "We're not animals, and this is inhuman!"

Vincenzo Nibali the defending champion is back and the Shark has the advantage, like Wiggins, at riding a smoking fast time trial. If he can keep it all together in the mountains, ride a fast TT a second victory is on his radar. 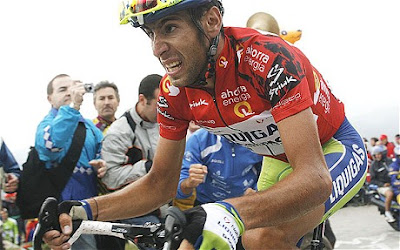 Empidog said…
Excellent, I was lucky to race against and meet Roberto at the 2009 Brompton World Championships at Blenheim Palace in Woodstock Oxon, Its on again tomorrow and I've got a race place BUT..No Brompton...Doh, we'll see what tomorrow brings...But what a gracious guy, He won and I didn't...Lol
August 20, 2011 at 12:42 PM