on September 24, 2011
Back in the saddle...
A happy Clara Hughes,
post race.
Thirty-eight year old, Clara Hughes is making a comeback.

She is one of Canada's most decorated Olympians who so far has six medals at the Summer and Winter Games. In fact, at the 1996 Atlanta Games she won bronze in the Time Trial and Road Race.

She left a successful cycling career winning Olympic and world championship medals before leaving cycling in 2003. Now, she's back! With the goal to make the Canadian cycling team for the 2012 London Games. She wants to ride the road race, team pursuit, and the time trial.

Her 2011 season is already on fire. At the Pan American Championships, she won the TT and road race. In May, she won the overall plus two stages at the Tour of the Gila in New Mexico.

She's having a fine world championships finishing fifth in a rainy and windy time trial. Team mate, Tara Whitten finished in fourth... so close to the podium.

Today's road race was quiet with two laps remaining, Hughes animated the less than animated peloton by a gutsy breakaway. At one point I was singing the praises of Hughes getting on that podium because of her daring dash. She had a maximum lead of 44 secs, then the pack reeled to her in for the expected final sprint won for the consecutive year by Giorgia Bronzini of Italy. The top Canadian was Joelle Numainville in 12th.

As for Clara Hughes she placed 103rd. Nowhere close to the podium, but an heroic ride moving her closer to her Olympic goal. 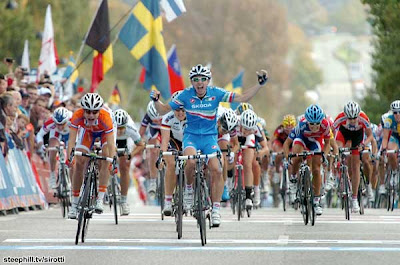 Another win!
Bronzini about to break the heart of Vos.
video World Championships