Froome vs Cobo: Down to the Wire 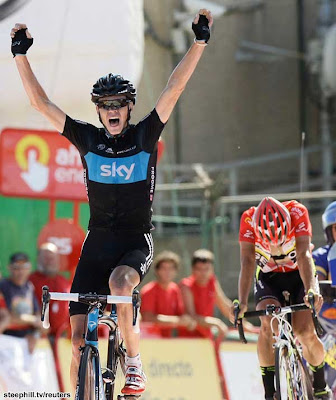 Hand(s) it to Sky!
What an epic stage!
This exciting Vuelta was fought tooth and nail on stage 17 on the 19 % gradient on top of the Pena Cabarga. Chris Froome dug deep into his depths of his being to pull out a fantastic attack then to lose and regain it to win a stunner of a finish that I haven't seen before.
Inside the last 2 kms the gloves were off and it was an epic battle between leader Juan Jose Cobo vs the up and comer Chris Froome.
Give credit where credit is due, Cobo looked cooked yet came back to dangle close to Froome approaching the line. He still had reserves, like a champion. Froome, like a gladiator, struck his last blow to overtake Cobo on the last bend to score a brilliant victory.
Wiggins lost 39 seconds and is fighting for a podium spot. But, the team leadership goes to domestique Froome who proves to be the stronger Sky rider. Utterly amazing effort by both men as a scant 13 seconds separates Cobo (roja jersey) and second place Froome. You know...there's plenty of action upcoming until Madrid!
Exciting, right down to the wire!
Grimpeurs video Vuelta a España