on September 11, 2011
Philippe Gilbert's master stroke was Friday when he took on a very talented field of riders and  powerfully won the Grand Prix Cycliste de Québec.

Robert Gesink dared to fight back to challenge Gilbert with meters remaining. Towards the finish line the classic strongman had a last over the shoulders glance to see if he was alone. The climber Gesink had taken the final hill and looked close to catching the Belgium champion. It was Gilbert, winning from a late surging Gesink in second and Rigoberto Uran excellently in third.

Michael Barry rode aggressively to help drive the Sky team to stay in contention. And at the end Uran was in the right position for that podium placing. Barry finished in 14th, awarded the top Canadian rider. Gilbert's moment in the sun catapulted him as world's number one in the UCI rankings.

A great day, simply, for the best rider of the season. 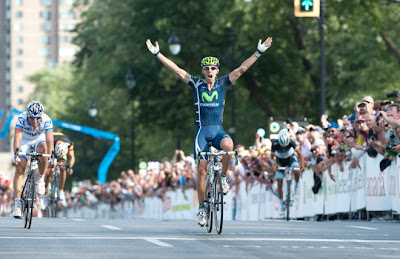 A Costa star for Movistar!
(Casey Gibson)
Unfortunately, I missed the live race of the Grand Prix Cycliste de Montréal but after work I raced back to watch the highlights.

Rui Faria Da Costa produced an awesome display of coolness to beat Pierrick Fedrigo and a desperate sprint by ... you guessed it Philippe Gilbert in an valiant third.

Earlier in the race, I followed twitter for the live action and read Gilbert and Dominique Rollin fell. Rollin had to abandon but the strongman Gilbert continued on and I thought it wouldn't be his day. He also had a mechanical and I read he was so upset he threw his bike to the side of the road. I wished I've  seen that.

Inside the last meters, Costa was today's power guy and blew past an excellent Fedrigo and a locomotive called Gilbert. Costa won into Super-Besse in this year's Tour and said, "My manager Yvon Ledanois told me I was the team's leader with Jose Joaquin Rojas and he said we had gone a long way to go home empty-handed. My stage victory in the Tour de France in Super-Besse remains the highlight of my career but this rates quite close. I never doubted."

Top Canadian went to Ryder Hesjedal, who was marking Gilbert, defending champion Robert Gesink at the front of the peloton and came in 11th. A good ride in a very difficult race to win when it came down to a sprint. He was 27th in Friday's GP de Québec.

Philippe Gilbert gets my last words as he has taken over as world number one ranking from Tour winner Cadel Evans. With his win in Québec City an additional 50 points by finishing third his total is 698, 124 points better than Evans. Two races remain in the 27 event WorldTour season; Tour of Beijing and Giro di Lombardia. When he was on the podium the classy number one ranked rider said, "I had no idea I had so many fans in Canada. It's good for our sport that our fans are not only in Europe."


Sit back and enjoy the action!