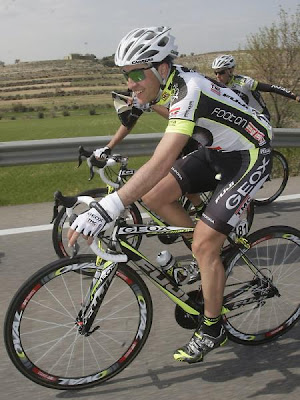 The 2008 Tour winner retires today from a 15-year cycling career. This season was successful for his Geox TMC team winning the overall and team classification in the Vuelta. He started the Vuelta as co-leader with Denis Menchov, finished in 20th helping Juan Jose Cobo win the overall. 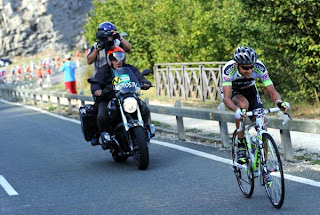 The move that almost worked...
Stage 20 Vuelta; attacking alone, Sastre's swan song ended
when he was caught with 3 kms left.
Known for his consistency in the Grand Tours, he developed as one of the top stage race riders in his time. Sastre only signed for a year with Geox TMC. Perhaps he already knew that the writing was on the wall. His last season was quiet yet with his hard work ethic along with his team, supported Cobo to overall victory.

I'm sadden he's decided to hang up the bike, his family encouraged him to ride one more season. I thought he would. But, he decided to take the big step down. Long live King Carlos!

Sad I've missed much of his career a newbie in the cyclist world.