Now that Thor Hushovd and Philippe Gilbert will be teammates on the super charged BMC team in 2012. They'll have to finish this season with one more big race. Before this merger happens there's a certain score to settle. The two uber riders will go for the huge marbles in Copenhagen on September 25th... and they both look set to challenge for the title of World Champion.

Today, Gilbert added to his lengthy 2011 palmares the GP de Wallonie. He masterly showed he has the undeniable class and energy to win on top of the uphill finish. This is his last race before the World Championships and it's difficult to believe he can falter in Denmark. 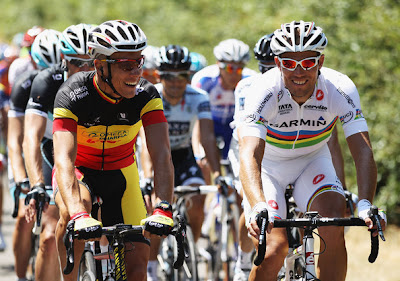 Should be fun next year!
(Bryn Lennon)

Thor Hushovd, powerfully won today's hilly stage 4 in the Tour of Britain. A stage win was his goal, now achieved he is eleven days from defending his World Championship road title. Like his friend, Gilbert, he too has won today and shown keen pre-world form. Is this more than a coincidence?

For their new BMC team, Gilbert has stated his goal is to go for the Classic races and Hushovd's biggest goal is to win the Hell of the North. What better way to leave these two uber riders, with two videos, as they prepare for the Tour of Flanders and Paris-Roubaix.