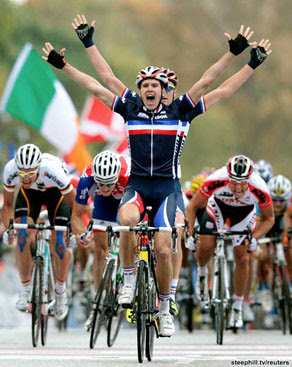 A French 1-2 occurred today in Copenhagen.

Arnaud Demare and team mate Adrien Petit outsprinted a huge group of hungry U23 riders to score a thrilling victory for French cycling. On the uphill finish the French bided their time for the ultimate win. The French two man train had the extra gas to ride past favored team's Australia and Italy to victory. Britian's Andrew Fenn hung in for an excellent third place bronze finish.

Demare, only 20 years old, will ride for FDJ next season. And could this victory be the start for a new French cycling renaissance?