Barry Back up to Sky 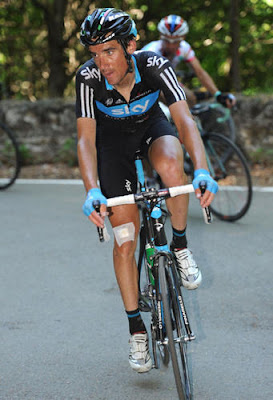 Barry in his key role as one of Sky's top domestique,
2011 Giro d'Italia
(Graham Watson)

After the world championship road race in Copenhagen, Michael Barry mentioned or didn't mention where he might end up next season.

I was left wondering, and I'm sure most of you who watched, that his days with Sky maybe over. Well,  he's re-signed with Sky along with Juan Antonio Flecha and Christian Knees. Boss, David Brailsford couldn't be happier to sign the three world-class talents and to have them continue their careers with Team Sky.

I'm looking forward to seeing Michael Barry return in the primary role as the experienced domestique. A role he made 'work' for him.

And, if experience is a key to success then Sky has it in aces!
Juan Antonio Flecha Michael Barry