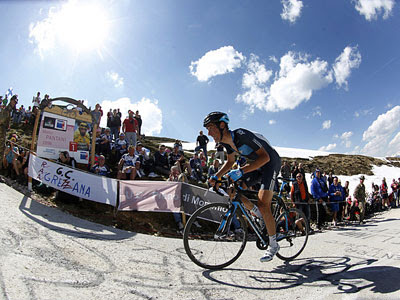 Michael Barry is going forwards to a new team for 2012
teamsky.com
Last week I posted a post race video (here) of Michael Barry's world championship road race and his plans for the 2012 season.
He actually hinted that his plans were to race but only smiled when asked if he was re-signing for Team Sky.
The good news is that Barry will return for 2012 but he isn't ready to reveal the team he will ride for... at least for now. That's where we can speculate where he will wind up with. He will be 36 this December and will ride his last race of the season for Team Sky at the Tour of Beijing (Oct. 5-9). At the end of this season he will leave Team Sky after three solid seasons as a domestique.
For his new team, he says that he will be playing his role as team captain and domestique. My take is he would fit well into Steve Bauer's Team SpiderTech and it would be a fitting way to end his classy career and also bringing invaluable experience to the Canadian squad. His goal is to make it to the Olympic Games in which I have no doubt he'll do.
No matter which team he'll ride for, we can be happy that the veteran Michael Barry will be returning to his favorite love of cycling...  his le metier!