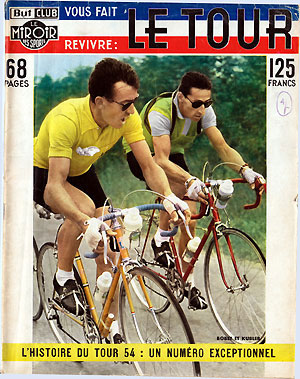 A who's who list of exciting heroes emerged from the Tour de France...

In 1950, the Swiss Ferdi Kubler was a TT devil winning the overall and proclaimed by Jacques Goddet as a 'cycling demon'. His compatriot, Hugo Koblet, in 1951 nicknamed the 'Pedaller of Charm' won solo to Agen crossed the line, ran a hand through his hair calmly checking his stopwatch, waited for his exhausted rivals. Koblet invented a matinee idol look known as the 'Italian Style' and won with a unique panache. 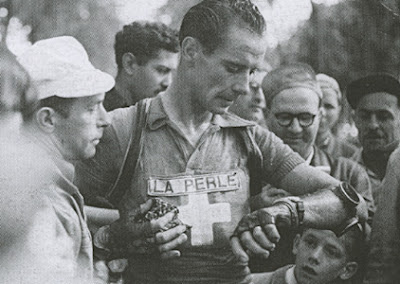 
Fausto Coppi returned in 1952 and annihilated everyone winning by almost half an hour, rode magnificently taking three great mountain stages. The great Italian was in a race of his own. Tour organizers re-invented the race in a huge way. A search for new terrain led to new mountain passes - Alpe d'Huez, Mont Ventoux, Puy-de-Dome and Sestrières - bringing more grandeur to the event.

It was still an innocent time, the cyclists raced with collars, front pockets with buttons, metal bidons stoppered with cork. Just like Hugo Koblet, they wrapped goggles around their arm.

The French public was yearning for a hero to call their own.

Despite saddle sores, Breton, Louison Bobet triumphed in 1953 finally winning the Tour on his sixth attempt. In 1954, the Tour started for the first time outside France, in Amsterdam. Bobet was there winning the stage to Briancon and extending enough time over a threatening Kubler. He won his second Tour and the hearts of France. Federico Bahamontes was making his first Tour debut in dramatic fashion. His talent was riding fast uphills but he was a poor descender. He stole an ice cream from an ice cream seller, ate it at the roadside waiting for his chasers. Bahamontes quirky demeanor caught the attention of the public and his teammates. "He's a very good climber, but completely mad," said teammate Jesus Lorono. Bahamontes climbed well, so well he won his first mountains classification. 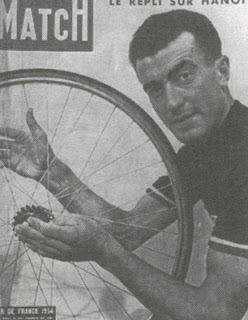 
French hero, Bobet came back in 1955, again riding through the pain of saddle sores to be the first to win the Tour three times in succession. He became a Tour legend. In the oven of the Ventoux, a heat exhausted Ferdi Kubler had to stop at a café, got back on his bike ...riding in the wrong direction. He abandoned and never rode the Tour again. 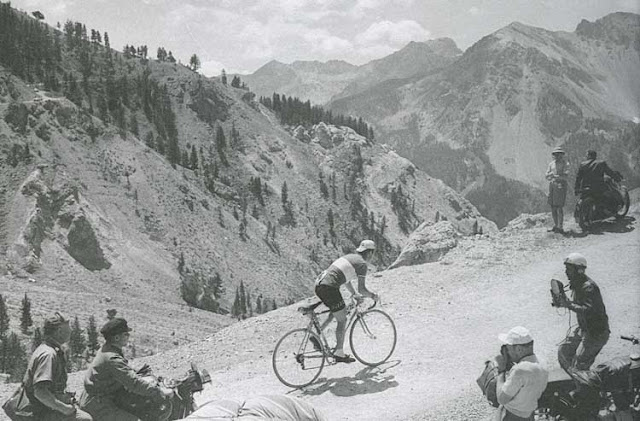 
The French came back in 1956, this time Roger Walkowiak surprised all with his resiliency and smart tactics to win. The following year, in 1957, the time trial was the domain of the young genius Jacques Anquetil (22), together with a super strong French team won his first Tour. In 1958, Monsieur Chrono pulled out due to a pulmonary infection giving way to a splendid Charly Gaul who won all three TT stages and the brilliant stage in the freezing rain to Aix-les-Bains. After 24 stages without a rest day, Gaul was the convincing overall winner. Federico Bahamontes came to the 1959 Tour looking to excel in the mountains. He won the mountain TT up the Puy de Dome and distance himself from the infighting of the French teams to win his second KOM's and become Spain's first Tour winner. As the 1959 Tour came to a close, two former French Tour stars ended their careers; Louison Bobet abandoned and Jean Robic was disqualified at Chalon-sur-Saone for missing the time limit. 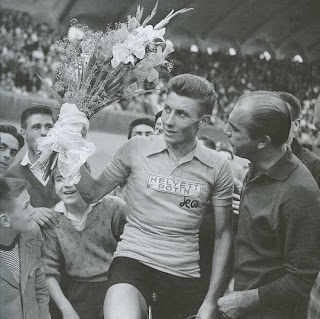 As the fabulous Fifties came to an end, a certain elegance and innocence disappeared. Great cycling heroes amidst the backdrop of the picturesque French country came forth, riders who represented the glory, suffering and soul of the Tour de France. 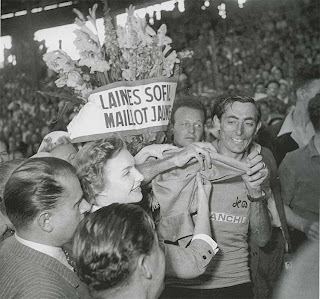