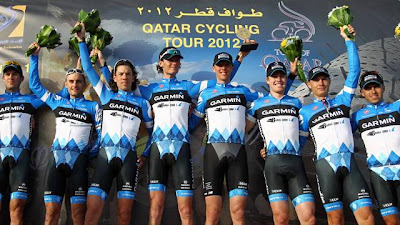 
The Tour of Qatar is on and the ride of the day goes to Garmin-Barracuda winning stage two, TTT.

Garmin-Barracuda (like the name) took over winning the TTT over Omega Pharma-Quick Step and Team Sky. The Barracuda's are creeping up on leader Tom Boonen in the GC; Tyler Farrar is second then Van Summeren, Navarduskas, Dekker and Hunter.


But before we yell up and down of their exciting desert ride, the news of the day goes to the CAS two-year sanction to Alberto Contador. Three days after Lance Armstrong's federal case was unexpectedly dropped, I'm relieved there is finally a decision but I'm frustrated, and there's a few out there, that it took 566 long and drawn out days to reach a decision. Obviously late. He tested positive for clenbuterol during a Tour rest day in July 21, 2010. The positive results were not confirmed publicly until September 2010 by the UCI.

Contador's ban is backdated from January 25, 2011, that's the date the Spanish Cycling Federation proposed a one year ban. He already served five months and 19 days suspension in 2010-11. The ban will run until August 5th of this year.

So, in reflection, Contador forfeits his 2010 Tour victory and all his 2011 results. He will be back in six months and will most likely ride the Vuelta. And Bjarne Riis is looking at more trouble as the UCI announced that Contador's Saxo Bank-Sungard team could lose its WorldTour license and demoted to Pro Continental status. Contador currently holds 68% of its points and because of his disqualification, "His team would no longer be considered to fulfil the sporting criterion required for the UCI WorldTour," as stated by the UCI.

Could this mean that Contador's August return will be on a Spanish WorldTour team? One that would be extremely happy to open their arms to a hungry and fallen champion with a great chance to win the Vuelta?

The drama keeps building and let's hope it doesn't take too long to arrive at this decision!