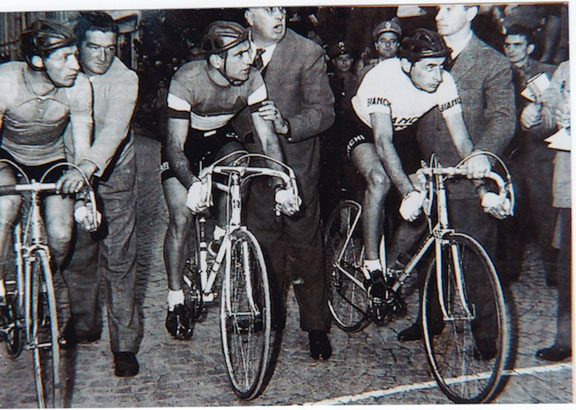 'People say that I was unlucky to ride with Coppi and Bartali...
it isn't true. I was very lucky. Those two devils taught me how to lose properly.'

I'm reading the engrossing and comprehensive book on the history of Italian cycling, 'Pedalare Pedalare' by John Foot. It is this book in mind that I write on one of my favorite Italian cyclists of all time... Fiorenzo Magni.

The 'other' Italian of cycling in the 1940s and 1950s was Fiorenzo Magni. He would have been a superstar in any other country and at any other time. In the era of Coppi and Bartali, there was no way for this great rider to be first. He fought like a lion over the pave, winning the Tour of Flanders three times. And, he also won three Giri d'Italia (1948, 1951 & 1955) and many other races.

He rode in the shadow of Coppi and Bartali, but whenever they lost, he would step in to win. He was the third man of Italian cycling, unfair to say; turning bald prematurely, unglamorous (not like his two rivals) and avoided publicity keeping a low profile outside of racing.

But his Third Man persona changed outside of Italy. Magni had huge reserves of strength and determination especially enduring the cold Belgium classic, the Tour of Flanders. He won three in succession (1949-1951) the only rider to do this amazing feat.

He loved cold weather and in the 1949 edition was urged on by the fans with tea and beer. How Belgian is that? In the 1950 race, Flandrian star Briek Schotte was second to Magni, afterwards saying that 'Fiorenzo was like a non-stopping express train. Once he had set off he only stopped at the finish line.' He loved the rain and cold temperatures saying 'as money in the bank'. In all, he rode four and won three. Belgians honored him as the Lion of Flanders.

Magni was born in the Tuscan town of Vaiano in 1920, outliving Bartali and Coppi becoming a living memory of the golden age of cycling... a living legend now at 91.