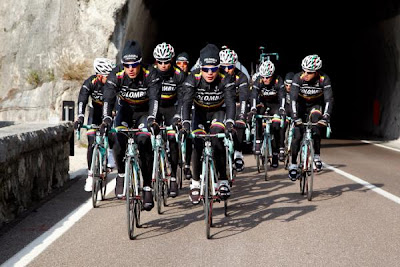 Training in Italy.
via Roberto Bettini

Led by veteran, Victor Hugo Pena and buoyed by 2008 U23 World Road Champion Fabio Duarte it's a team that has very good chances to succeed.

They're an eager bunch and already invited to ride the exciting Italian classics Tirreno-Adriatico, Milan-San Remo and Giro di Lombardia. Unfortunately, they won't ride the Giro and we'll miss out on seeing their rise in the mountains.

After all, on the side of the team bus has the words, 'Inspired By Climbing'... that's a positive message for this season, which I'm sure they aim to prove!