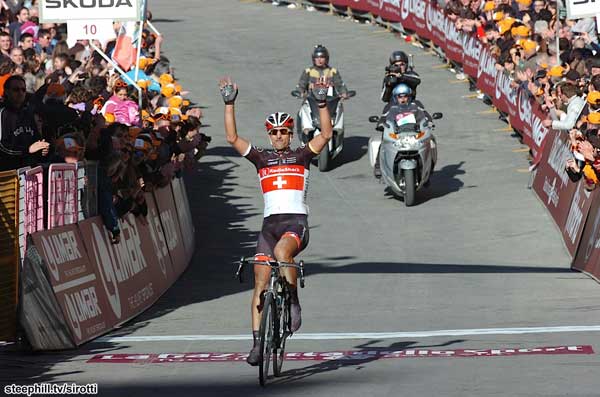 No one close,
Cancellara decides to blow everyone away to win his second Strade Bianche!

With 12km left of the Montepaschi Strade Bianche classic, Fabian 'I'm back and stronger' Cancellara attacked on the final section of strade bianche bulldozing his way past a helpless Greg Van Avermaet. Cancellara motored away looking like a different gladiator than last year and more like the winning Spartacus of old. I wondered if Hushovd and Boonen were tuning in and paying attention to a real threat when Milan SanRemo, Flanders and Roubaix come.

He just turned on the afterburners and went time trial mode and never looked back. At onne point he was chronoing so hard he was close to smacking the rear of an official's car.

Luckily for the car, he swerved and blew by it. During the last 10kms, the gaps grew between Cancellara and the chasing group of five; Gatto, Inglinsky, Ballan, Van Avermaet and Kreuziger.

He finished in Siena 43 seconds ahead of Maxim Inglinsky (2010 winner) and a very good Oscar Gatto, effectively riding a time trial and showing he's back, a gladiator to watch in the upcoming classics... he has his mojo back!