The Cat Almost Came Back 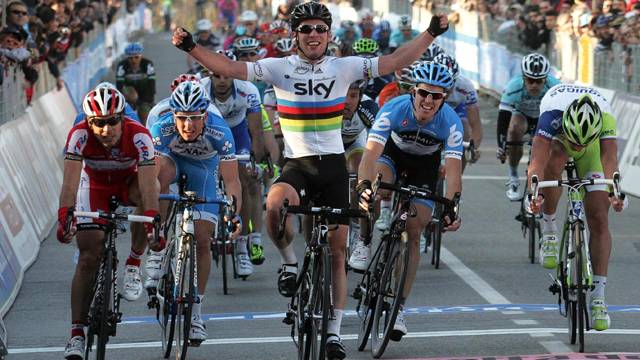 With many of the world's top sprinters at Tirreno-Adriatico, stage 2 was a good prep for the upcoming classic, Milan-San Remo (March 17).

San Vincenzo to Indicatore, 230 km stage meant for the sprinters. I read online that the road to the finish was only 20 feet wide, and you have to wonder how the sprinters can funnel through that small space?

In the end, came the dramatic conclusion to a long day as Robbie Hunter was the pilot fish to Tyler Farrar (winning here last year) leading him out for a repeat win. Edvald Boasson Hagen pulled for Mark Cavendish. As Farrar started his gallop, Cavendish pulled to the right and sprinted past Farrar for the win. The Oscar the Cat Friere was too late to pounce on the Manx Missile finishing a good second. Farrar was third, a lunging Peter Sagan in fourth and a feisty Sacha Modolo in fifth.

Peter Sagan is a favorite and looks forward to MSR and hopes to put that feather in his cap. One other sprinter that I believe is a dark horse is Sacha Modolo, fourth in 2010.

The Cat Came Back!