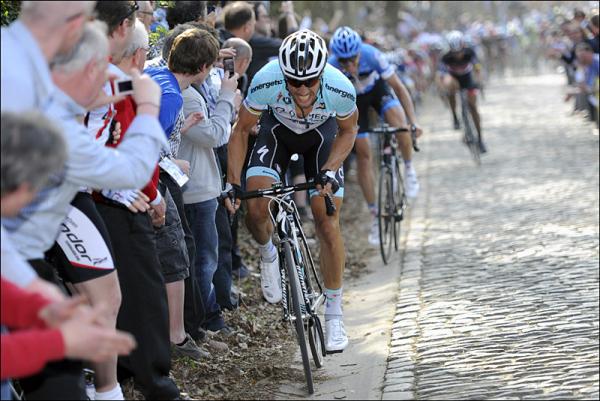 King of Pain...
Powering up the Taaienberg
Photo: Bettini


Tom Boonen is on fire finishing off with a devastating and well timed sprint to beat Oscar Friere for a record fifth victory of the E3 Prijs Vlaanderen - Harelbeke.

David Millar was one of the many riders who fell and DNF. I read on his twitter that he had the operation done on his broken collarbone. His last tweet humorously read...


"I can see why Howard Hughes got into his morphine shit. Makes a particularly average day really quite excellent."


Fabian Cancellara looked his all powerful self until he fell victim getting smacked from behind by Carlos Barredo, waiting for a front wheel change. It was not his day. For Oscar The Cat Freire, he just lost out finishing second citing that he started his sprint too late.

It was exciting and full marks go to the classy, Sep Vanmarcke for his gritty ride (5th) and now he will rest and lead the Garmin's in the Tour of Flanders and Roubaix.

Tomorrow is the famous 234km Ghent-Wevelgem and Boonen is a front favorite along with Cancellara. The Kemmelberg (riders will ride it twice) will be a good battle ground ie mayhem on the cobbles & twisty descent.

Look for Farrar, Sagan, Pozzato and The Cat to be super challenging in the final sprint.