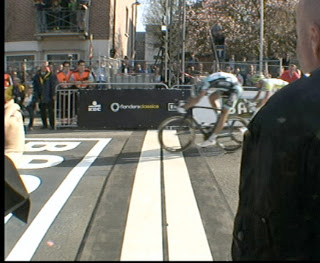 The final sprint was fierce and included some high speed shenanigans. With Cavendish quite out of the pictiure, Boasson Hagen managed to place himself in the right position for the final sprint until he uncharacteristically lashed out at a Vacansoleil rider. He and Goss later complained of the messy sprint. Then, Rojas and Tossato touched wheels bringing them down impeding Van Avermaet. But, there seems no stopping Boonen as his sites are firmly on Flanders and Roubaix.

Matti Breshel is back on good form coming back from a knee injury and had to set out in 2011's classic season. He looks ready for Flanders.

Brilliant result for the young Sagan, a rider to watch as he will ride the Three Days of De Panne then go for Flanders, his goal of this season.