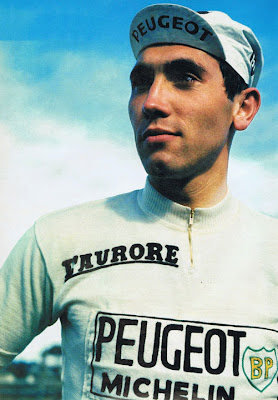 I don't know what jersey he's wearing in this image, for the confident looking 22 year old Eddy Merckx, his palmares are already looking golden.

In 1967, his third year as a Pro, he won his second Milan-San Remo, Ghent-Wevelgem, Fleche-Wallonne crowning the year winning the World Championship Road Race.

That year he rode his first major stage race, the Giro, and finished 9th. He said...


"I was very satisfied with my ninth place in the final classification. It was gradually dawning on me that I probably had a future in stage races too."