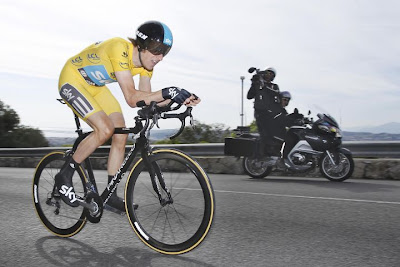 Time's on his side.
Photo: Sirotti

I must admit I woke up late, one of those rare times I forgot to move my clock ahead for the Spring jump.

Waking up completely discombobulated, I switched on my computer to only enjoy watching The Shark Nibali ride off in the last 3 kms of Tirenno-Adriatico. I couldn't find the feed to Paris-Nice and the final stage TT. I was looking forward to watching this classic Col d'Eze TT, wondering if Wiggins would become the second Briton to win the prestigious race.

Hastily drinking a cup of coffee, I realized to my horror the error of waking late. In fact, it was 7:30 and not 6:30 as my bedside clock read. But, as you can pretty much find on time race info online, I discovered  Bradley Wiggins had won the TT stage and the overall victory over the very competitive Lieuwe Westra (the Mende stage winner).

I wasn't so surprised that Wiggins won ...but how he did it.

In the prologue he was just one second off the winner, Gustav Larsson. Then, along with his strong SKY team, he took over looking pretty calm and the strongest rider throughout the entire race. Wiggins kept his composure never panicking, riding so well that he beat Westra by a scant two seconds. He also won the Green Points Jersey and becomes the second Brit after Tom Simpson (1967) to win PN. Frenchman, Jean-Christophe Peraud (Ag2R) put in a great ride placing third (33s behind).

Wiggins wins a huge race as his direction leans towards July where an even bigger goal awaits.

For me, I've already adjusted my clocks and my goal is to watch tomorrow's Tirenno stage...

Excuse me while I go check the time... just to make sure!