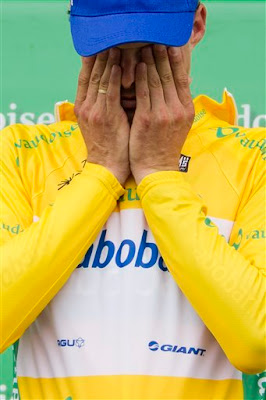 
I awoke early this Saturday morning (5:30am) expecting exciting racing at the Tour of Turkey and Tour de Romandie.

And, I wasn't disappointed!

Was a mad dash for lljo Keisse (Omega Pharma) inside the last bend. The six-day track rider fell onto the tarmac. His chance for a solo breakaway victory fizzled. Meanwhile, a hungry peloton was closing and Keisse calmly, I mean he was Mr. Calm, remounted his chain got back on his Specialized and decided to ride the last kilometer as the track specialist that he is.

I've never seen an end to a race like this before. As he was within the last 300 meters, the peloton led by renown fast men, Kittel and Petacchi looked poised to catch the Belgian rider.

It's hard to keep a track man down... The very swift and calm lljo Keisse rode and cross the finish line triumphant in front of Marcel Kittel (second) and Alessandro Petacchi (third).

Tejay Van Garderen was struck in the face by a tree branch descending off the first climb. The winds were whipping around 60kph, so much so a branch hit the American cutting his nose forcing him to abandon. Going into today's stage, Van Garderen was in 17th place, 15 secs behind Wiggins and 4th in the Young rider classification, a good GC placing taking out by tree branch. 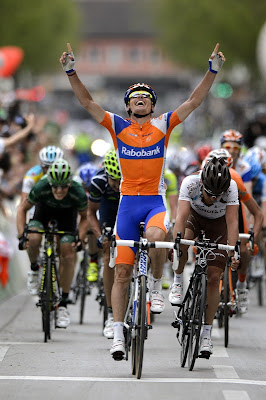 Bradley Wiggins won't be getting a birthday present today. Luis Leon Sanchez, started the day one second behind him, won the stage with a 10 second time bonus, holds the yellow jersey.
Which paves the way for tomorrow's final stage, the time trial. Nine seconds to beat?