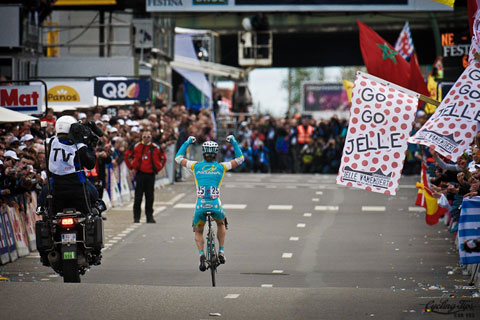 
Who would've thought that Maxim Iglinsky would win Sunday's Liege-Bastonge-Liege?

I didn't have him on my radar but yet he won with a brilliant late chase passing an equally impressive Vincenzo Nibali to win the biggest race in his career. The Shark of Messina is one rider to watch for in the upcoming Giro for the overall victory. One things for sure, this talented rider has grinta, he'll be back to win a big classic. His talent is being recognized (with big bucks) as Liquigas has confidence to offer him a 2 year extension of $1.8 million Euros per year!

The major favorites were not there in the end of this grueling classic supported by winds, intermittent rain and cold. The Schlecks disappointing Ardennes showing was plain and simple, not their day for success. Further hints of seeing Frank and Alejandro Valverde (2006 & 2008 winner) at the back bundled due to the cold was not the conditions for them. Even heavy local favorite and my favorite, PhilGil didn't have the legs to respond when Nibali launched his attack on the climb of La Redoute.

Nibali kept up his attack and grinta and I was certain he would finally win his first Monument. It was quite a feat, when Iglinsky left the clutches of Rodriguez caught and rode away from an exhausted Nibali

Iglinsky ruled the day, surprised himself and his team manager, Guido 'The Cyclone' Bontempi said...

It's a big surprise for us. We came here looking for a good result and now we've won two out of the past three races; it's amazing.

Groover said…
It was quite strange how all the built up excitement fizzled out here. We watched the finish in a tiny souterrain cycling club room near La Redoute on a small 15" TV with about 20 cycling fanatic Belgians. Quite the experience!
April 25, 2012 at 11:34 PM