Two Colombian Cycling Icons & One in the Making 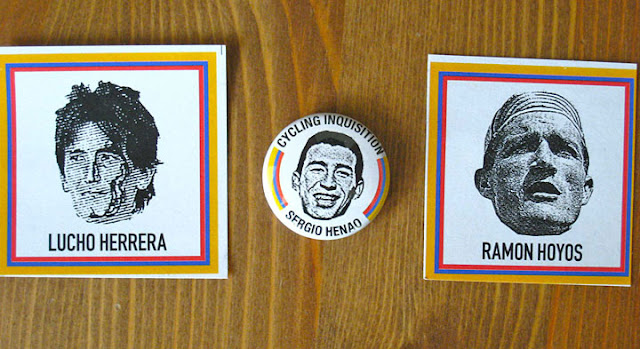 Don't worry, I haven't kidnapped anyone.

I recently received more made in Colombia ribbon from Klaus (Cycling Inquistion) for another order of the hugely popular and quickly selling... Colombian Cycling Sombreros. With the colorful ribbons in hand, Carolle and I are flexing our nimble fingers and getting into cycling cap production.

It's a pleasure to be making these colorful and handsome cycling caps. And I'm happily bombarded with, thanks again Klaus, the stickers of Colombian cycling icon's; Lucho Herrera and Ramon Hoyos. The middle image is a button pin of first year pro for SKY and icon in the making... Sergio Henao.

Sergio Henao is work in progress, a grimpeur in the Colombian sense: born in the mountains with talent to burn. He signed a two-year contract for SKY, and in his first season he's learning the ropes in Europe. When I write he's a grimpeur, well he is, he's already won the 2010 Vuelta a Colombia.