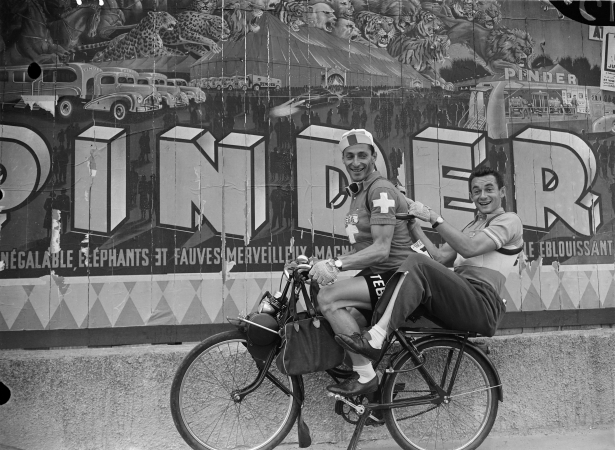 Ferdi Kubler and Roger Hassenforder relax and ham it up at
the 1955 Tour.

The riders need it, but then some would say it disrupts the rhythm of the race. They soft pedal during the rest days to keep their legs loose. Especially after the first week, the riders get to catch up on some much needed rest. Mind you, in 24 hours they'll all be back for the start of the Pyrenees stages this Wednesday where the action will really get under way. Can Wiggins be toppled from his yellow perch? Is Evans, Nibali, Van Den Broeck or someone else be waiting in the Pyrenees to do battle? I'll bet my last penny on that.

Today's stage 15 was a nervous and hasty one before the Pyrenees fireworks. Pierrick Fedrigo led a six-man breakaway. And, Wiggins and the rest of the GC contenders decided to play it safe, almost 12 minutes behind. Not to put the superb win from Fedrigo down, I was cheering for super aggressive, Christian Vande Velde to keep the depleted Garmin squad winning. A sprinter he is not. For FDJ-Big Mat, another excellent win taking advantage of opportunities for those elusive stage victories... Marc Madiot was surprisingly subdued when interviewed. (I bet he was happily screaming and kicking on the inside).


A lot of people are tired now, mentally more than physically. It was hard today nonetheless. It was quite hot. And the road was hilly.


So let's take the second rest day off and relax ... before Wednesday! 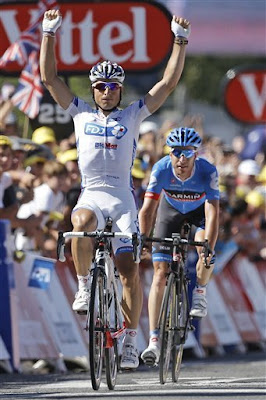